Track - The valley of the Syre 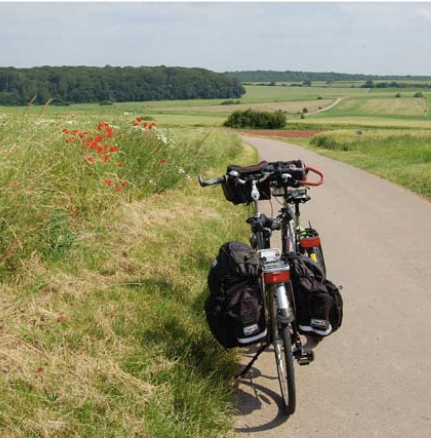 At the foot of the Luxembourg sandstone hills, runs the Syre from the south-west to the northeast, between Medingen and Niederanven, the Keuper landscape and its grayish-red marl soil, rich in limestone. Between Uebersyren and Mensdorf, large reed beds and wetlands line the river with a total length of 32 km flowing into the Moselle near Mertert. The "Schlammwiss", situated between Uebersyren and Mensdorf, is the largest reed bed in Luxembourg and is the habitat of many bird species threatened with extinction. A landscape of structured hills, composed of ancient orchards, hedges and forests, surrounds the valley bottoms along the Syre. The “Aarnescht” nature reserve, known for its many varieties of orchids, is easily accessible by bicycle and invites you to a beautiful walk.

Cyclists who prefer shady trails will appreciate the cycle paths that cross the largest forest area in Luxembourg and its surroundings, the "Gréngewald". The "Gréngewald" plays an important role in the water supply of many municipalities. The Luxembourg sandstone on which it extend, is the largest and most important groundwater reserve in Luxembourg. The many sources in the slopes are partly used for the production of drinking water. The “Birelergronn” trail illustrates the importance of the region for the production of drinking water.

In the same region there also lays the only airport of Luxembourg. Because of the proximity to Luxembourg-city, the SIAS municipalities play an important role in the national economy. Numerous industrial zones have emerged around the airport, the motorway linking Trier-Luxembourg and the Luxembourg-Wasserbillig railway. The construction of new residential areas reflects the high demand for these municipalities, although there are still farm buildings that have been tastefully restored in the heart of the villages.

The varied landscape of the SIAS region reserves unique places for cyclists in search of discoveries. The Romans were already convinced of this. In fact 2 ancient Roman roads run through this same area, still witnessed today by the many places ("um Kiem") or street names ("rue du Kiem").

Download the flyer including the map and further information

This flyer is available in every Municipality of SIAS.

Tracks of the national cycling network

The national network as foreseen by the law encompasses some 950 km of trails, of which 600 km are currently ready to use. A possible extension of the network, which comprises 23 tracks, would require an amendment to the 1999 Act.

By the Act of 6 July 1999 establishing a national network of cycle paths, the Public Works Department has been mandated to create a national and coherent cycling network, linking the different regions by their main economic topics and touristic highlights by various cycle trails.

The national coverage of this network has to ensure coherence, guarantee a uniform and high standard of these tracks and above all allow the municipal authorities to be grafted on the national network thus allowing intercommunal interpenetration of the tracks.

Many municipalities realize or plan local cycling infrastructures that naturally complement the national network and are the necessary prerequisite for the promotion and rooting of non-motorized traffic.

The Grand Duchy of Luxembourg has a relatively rugged topography with the lowest point in Wasserbillig at 132m above sea level and the highest point at 559m at the Buurgplaatz near Huldange. During the projection of the different paths of the cycle paths, it was not always possible to follow the ridges of the hills or the bottoms of the valleys. When taking certain tracks, it is necessary to calculate more journey time, given the short but steep climbs and the long joints for each track.

The users of the national track network and of any other cycle track are obliged to respect all the national traffic regulations valid in Luxembourg. Road safety has recently published a brochure called "Code de la rue" (street code) in which the main rules concerning the sharing of the road between different users (pedestrians, cyclists, motorcyclists and motorists) are explained.

Helmets are strongly recommended and cyclists are advised to stay on the right lane of the bike trails.